skip to main | skip to sidebar

Although, from what I have read so far, I think global warming is real, dangerous and coming on quickly, there is no excuse for sloppiness in UN scientific reports. Also, dissenting scientific opinions should be welcomed, which is how you get to better understand the factual truth of things. Were the global warming dissenters to be correct, many environmentalists would rejoice. There were plenty of other environmental disasters to work on before anyone had to worry about icecaps melting, oceans rising, and all the rest of it. Although, let's face it, if Godzilla were merrily knocking down skyscrapers and barbecuing taxi cabs while lunging through the streets of Manhattan, it would not be long before U.S. Godzilla policy would become a raging tooth-and-claw partisan political fight. --Relating to “Series of Missteps by Climate Scientists,” Eilperin and Fahrenthold, Washington Post, 2-15-10.
- - - -
Border Enforcement + Immigration Moratorium = Job, Crime and Eco Sanity.

Posted by tma_sierrahills at 9:00 AM 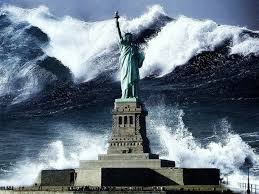 There is something darkly comical about having two American presidents in a row grimly believing that they are duty-bound to send mechanical hunter-killer drones practically through the open tent flaps of those in remote locations who might violate U.S. security, while  at the same time these same presidents almost salivate in eager anticipation at the prospect of signing yet another amnesty for millions of illegals who have violated U.S. security and sovereignty by intentionally physically invading America's borders. --Relating to “Under Obama, More Targeted Killings,” by DeYoung and Warrick, Washington Post, 14 Feb 2010.
- - - -
Border Enforcement +  Immigration Moratorium = Job, Crime and Eco Sanity.

Posted by tma_sierrahills at 2:55 PM