skip to main | skip to sidebar

Posted by tma_sierrahills at 2:38 PM

Way of the World Video Short: The Unstoppable Rise of Nationalism

NBC: Guardian Angels to patrol Jewish neighborhoods in New York City after recent attacks - Good but where are they when Trump supporters and other patriots, populists and traditionalists are attacked by Antifa? --tma

The Guardian Angels, a private, unarmed crime prevention group, said it would start patrolling the New York borough of Brooklyn on Sunday following a series of anti-Semitic attacks.
Curtis Sliwa, who founded the organization in New York City in 1979, said the patrols would start at noon in the Crown Heights neighborhood and expand to Williamsburg and Borough Park later in the day. ...
https://www.nbcnews.com/news/amp/ncna1108251
Posted by tma_sierrahills at 8:32 AM

Which is, of course, laughable to anyone who has even glancing knowledge of the channel's offerings. Running down this year's schedule of Christmas movie offerings is like a trip into an uncanny valley of shiny-teethed, blow-dried heteronormative whiteness, with only a few token movies with characters of color. It's like watching "The Stepford Wives," but scarier, since the evil plot to replace normal people with robots is never actually revealed.
None of this should be a surprise, because Hallmark movies, as cloying and saccharine as they are, constitute the platonic ideal of fascist propaganda.
That is probably a startling statement to some. When most of us think about fascistically propagandistic movies, we think of the grotesque grandeur of Leni Riefenstahl's films celebrating the Third Reich — grand, but cold sweeping shots of soldiers goose-stepping and flags waving, all meant to inspire awe and terror. But the reality is, even in Nazi Germany, the majority of movies approved by the Nazi minister of propaganda, Joseph Goebbels, were escapist and feather-light, with a Hallmark movie-style emphasis on the importance of "normality." ...
https://www.salon.com/2019/12/25/hallmark-christmas-movies-fascist-propaganda/
Posted by tma_sierrahills at 10:18 AM

Axios: U.S. companies are forcing workers to train their own foreign replacements - after 3bil tax breaks AT&T jettisons thousands of American workers - "American workers are tired of waiting for President Trump to do something on this issue" 
Opponents of job outsourcing are making a holiday-season appeal to President Trump: Stop U.S. companies from forcing American workers to train the very same cheaper foreign laborers who will soon replace them.
Why it matters: Trump promised voters he'd end abuses of worker visa programs and save U.S. jobs — but as he campaigns for re-election, advocates say he hasn't done enough. ...
https://www.axios.com/trump-att-outsourcing-h1b-visa-foreign-workers-1f26cd20-664a-4b5f-a2e3-361c8d2af502.html
Posted by tma_sierrahills at 8:56 AM

Daily Mail - NY: Black man, 37, is arrested for 'storming into a rabbi's home with a machete and stabbing five people' during a Hanukkah party - 'Diversity is our strength!' --political media corporate legal educational Hollywood America

New York City police have arrested a man suspected of stabbing five people in a rabbi's home during a Hanukkah celebration in a predominantly Jewish town in upstate New York on Saturday night.
The suspect was identified as 37-year-old Thomas Grafton of Greenwood Lake, New York, a police source told CNN.
Grafton allegedly stormed into the home of Rabbi Chaim Leibush Rottenberg, the leader of Congregation Netzach Yisrael-Kosson, in Monsey at around 10pm and began wildly swinging a machete at some 60 worshippers gathered for a candle-lighting ceremony for the seventh night of Hanukkah. ...
https://www.dailymail.co.uk/news/article-7833919/Multiple-stab-victims-reported-synagogue-upstate-New-York.html


Posted by tma_sierrahills at 8:31 AM

VDARE's 20th Anniversary - VDARE's Peter Brimelow is kind of a combination of Paul Revere and Thomas Pain. And he is British! But moved here and became an American citizen to try to save the Historic American Nation from being swamped and destroyed by runaway migration. A historic hero living among us! --tma 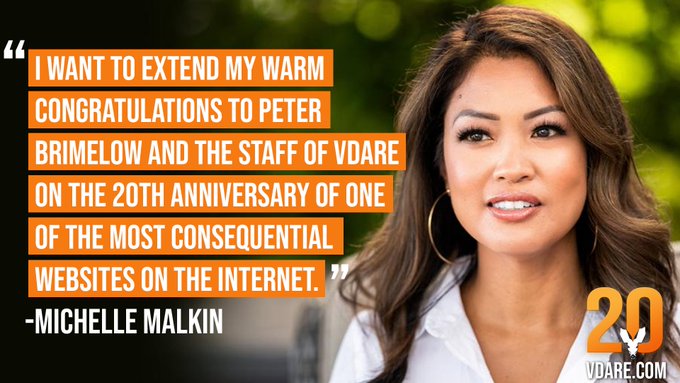 A wild brawl erupted at an upstate New York mall on Christmas Eve, with the fighters wreaking havoc in The Beef Jerky Outlet.
In a viral clip posted to Twitter at least 10 people battle each other in the melee at Albany’s Crossgates Mall. ...
Every once in awhile I'll read about mob violence breaking out in a zoo. I kid you not, it always seems to be in the African safari section.
https://nypost.com/2019/12/26/see-it-wild-melee-breaks-out-at-upstate-new-york-mall-on-christmas-eve/

Posted by tma_sierrahills at 8:41 AM

The idea of America "Balkanizing," or breaking into different areas of "red states" and "blue states," is a false hope. It's not going to happen. Balkanization, or a USSR-style breakup, presupposes the regional leaders are chafing under the central authority and will do everything they can to increase their own autonomy and political power. Yet that's not what's happening. Instead, Republican governors are going out of their way to welcome more Third World "refugees," even though these populations will vote against the GOP and turn once conservative red states into solid blue states.

15 GOP governors who have joined the Soros bandwagon:

Defend Europa: Making Colonialism Great Again - a tour of what the native peoples of the Americas were doing before and while we arrived


For our progressive countrymen, nothing in history is more abhorrent than Western colonialism. Especially when it happened to the ‘noble’ peoples in the Americas. They see this episode of Western history as oppressive, evil and something all people of European descent should feel guilty about. I want to take you on a tour of what the native peoples of the Americas were doing before and while we arrived. ...


Posted by tma_sierrahills at 9:20 AM 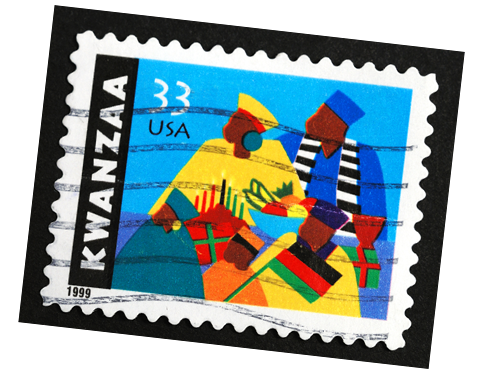 
Melania and I send season’s greetings to those observing Kwanzaa both in the United States and around the world.
For more than 50 years, this weeklong celebration has been used to honor the heritage and culture African Americans share around the country and worldwide. Every aspect of American life has been enriched by the countless contributions of African Americans. Kwanzaa is an opportunity to foster deeper cultural understanding and build stronger bonds of mutual respect and friendship between all Americans.
We hope the light of the Kinara fills your homes with hope and joy, and we send our best wishes for a New Year filled with good health and much happiness ...
https://www.whitehouse.gov/briefings-statements/presidential-message-kwanzaa-2/
Kwanzaa, celebrated exclusively by white liberals, is a fake holiday invented in 1966 by black radical/FBI stooge Ron Karenga -- aka Dr. Maulana Karenga, founder of United Slaves, the violent nationalist rival to the Black Panthers. Liberals have become so mesmerized by multicultural gibberish that they have forgotten the real history of Kwanzaa and Karenga's United Slaves.In what was ultimately a foolish gambit, during the madness of the '60s, the FBI encouraged the most extreme black nationalist organizations in order to discredit and split the left. The more preposterous the group, the better. (It's the same function MSNBC and CNN serve today.)By that criterion, Karenga's United Slaves was perfect. ...
http://www.anncoulter.com/columns/2017-12-27.html

Posted by tma_sierrahills at 9:06 AM

Emma Sánchez waited patiently in line at the foot of a bridge leading across the Rio Grande and into Texas, one of tens of thousands of people stuck on Mexico’s northern border seeking political asylum in the United States.
“They cut my husband to pieces and dumped his body by the road,” Sánchez said matter-of-factly ...
https://www.latimes.com/world-nation/story/2019-12-26/seeing-a-central-american-surge-mexicans-join-the-asylum-line-at-the-u-s-border
Posted by tma_sierrahills at 8:44 AM

Posted by tma_sierrahills at 8:45 AM

Computing Forever: Ghostbusters 2020 Review - Interesting but sadly naive - woke feminism is just one aspect of anti-white - enough $ lost may tone it down but will not end due to current owners of Hollywood --tma

Daily Mail - Teen Christmas Shopping Mall Brawls Break Out All Across America - You see, this isn't about our usual suspects of countless criminals and thugs--this is about teens, Christmastime shopping and our booming economy! --tma

Brawls show teenagers in several malls fighting during busy shopping season At least eight teens were filmed fighting in Cordova Mall in Pensacola, Florida A video posted to social media showed a brawl in Castleton Square mall in Indianapolis A gunshot was heard in Alabama mall when police tried to arrest shoplifter New Jersey police were called to an Elizabeth mall after false report of gunshotsPhoenix police on Monday shot and killed an armed carjacker outside a mall ...


Posted by tma_sierrahills at 8:54 AM

One such initiative being funded by the grant is a program meant to "revise" curriculum at the college to be more "inclusive."

In a statement to Campus Reform, the school's VP for Academic Affairs boasted about the institution's "international flavor." ...

Posted by tma_sierrahills at 9:18 AM

In the current paradigm, the only tolerated answer for why so many black – and brown – pupils are disciplined at disproportionate rates than white students is due to white supremacy, structural inequalities, and racism deeply imbedded in the criminal justice system.
The simple, logical reason being black (and brown) students engage in the majority of anti-social behavior in public school classrooms across America, and are thus disciplined for their actions is verboten, an unforgivable sin by any who dares utter or write such blasphemy. ...
https://www.unz.com/sbpdl/can-we-just-make-it-illegal-to-discipline-black-students-black-congresswoman-from-massachusetts-pushes-2-5-billion-bill-to-basically-abolish-school-discipline-in-public-schools-because-too-many-blac/
Posted by tma_sierrahills at 9:26 AM

Chicago police are questioning two suspected gunmen after 13 people were wounded, four of them critically, during a shooting inside a large memorial gathering early Sunday in the Englewood neighborhood on the South Side, authorities said.
About 12:40 a.m., a house party - celebrating what would’ve been the birthday of a man who also died as a result of gun violence - was held in the 5700 block of South May Street. Around that time, someone inside opened fire, sending 13 people to area hospitals with gunshot wounds, according to Chicago police. ...

MetroUK- Hilarious Roundup of Catastrophic 'Cats' Reviews - tma notes: Musical equivalent of 'Planet 9 From Outer Space'--to be marveled and laughed at till the end of time? - I've always thought actors should qualify for Bad Director's Insurance but with Hollywood-Nashville bubbleheads like Taylor Swift involved I cannot summon any sympathy